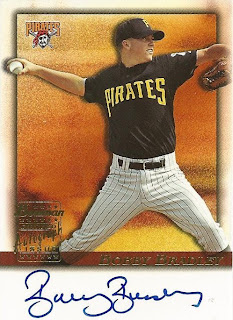 Bobby Bradley was the Pirates first round draft pick of the 1999 MLB Draft.  He was selected 8th overall out of Wellington High School in Wellington, Florida.  He reportedly signed for a little over $2.3 million which was overslot at that time.  He began his professional career that year and was voted to the 2000 Futures All-Star Game as a 20 year old.  In 2001 Baseball America had him ranked as the 20th best prospect in all baseball. 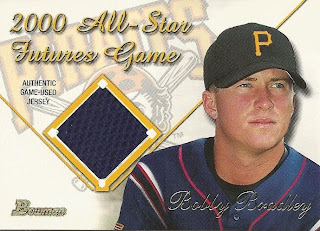 Leading into the 2001 season, Bradley had pitched 119 innings with 149 strikeouts, 1.04 WHIP, and an incredible 2.47 ERA.  It seemed like Bradley would be fast tracked to the majors and may provide the first true ace pitcher the Pirates had since Doug Drabek in the early 90s.

Bradley however started to have many injuries including Tommy John Surgery and never made it to AAA until his age 24 season in 2005.  After only 12 innings of work in AAA, he was ultimately released to make room on the 40 man roster for Zach Duke.

The fact that he never got a cup of coffee in the majors is really a sad story and just goes to show the risk in taking pitchers in the draft.  There's a lot of risk involved in developing pitchers and it's a shame that many of them don't get a chance to see their big league dream come true.  I think if Bradley had not been injured, he could have been a legitimate ace based on the scouting reports I've read and his makeup.

I picked up the above 2 cards for less than $2 a piece from COMC which I will highlight some other of my sweet pickups tomorrow.


For those reading, who is the biggest let down of first round draft picks for teams you root for?
Posted by Unknown at 9:13 PM 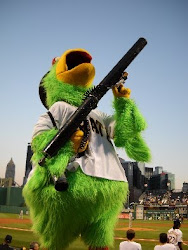